The Film Academy Baden-Württemberg in Ludwigsburg, one of the world's leading educational institutions for film and media, has modified its Panther p1 Dollies for the usage with V-Mount batteries – along with this pioneering project, the V-Mount standard is entering stage technology for the first time. 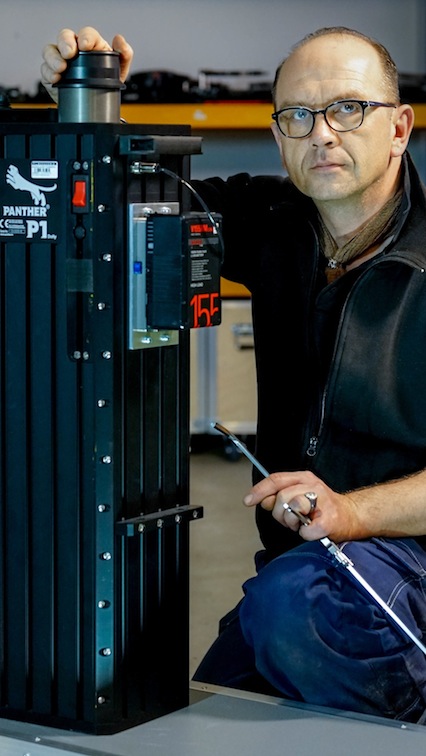 Bernd-Siegfried Michalek, Technical Manager for the mobile production equipment at the Film Academy Baden-Württemberg: "We strive to provide a fully integrated battery system for all our production equipment, be it camera or audio, light or stage. Our battery park contains about 500 V-mount batteries. Our entire camera and audio technology is already equipped with V-Mount. The rapid progress in the LED technology and the resulting decreasing power consumption make it possible for us to supply more and more lamps with V-Mount batteries. The last bastion was the stage technology, but thanks to bebob’s high-current batteries and plates we were able to convert our dollies to V-Mount – in close cooperation with the company BVS from Rüsselsheim. A final evaluation by the German Technical Inspection Association TÜV is the concluding step of this project.“

Christoph Aust, Managing Director at the bebob factory: "Last year, we launched the new CINE V-Mount batteries and plates. Special feature of the CINE V-Mount standard is the ability to transmit a continuous current of up to 20A. Conventional V-mount technology has hitherto been limited to 12A in the best cases. Our new batteries open up completely new usage scenarios – it is possible for the first time now to supply devices with a current consumption of up to 300W. "

The Film Academy Baden-Württemberg once again proves its pioneering role in the field of camera technology. The supply of a dolly with two camera batteries is a perfect example for the great opportunities modern battery technology is opening up today...